In late July of 2019, the San Diego Mountain Biking Association (SDMBA) completed a desperately needed and long fought trail addition in the Del Mar Mesa . The newest section of connecting loop was completed through Deer Canyon. Although not officially open until the restoration project is completed in late 2019 finally creates a legal loop back up to the Mesa.   The land will ultimately be turned over to the City of San Diego and increase the riding options in and around Los Penasquitos Preserve. 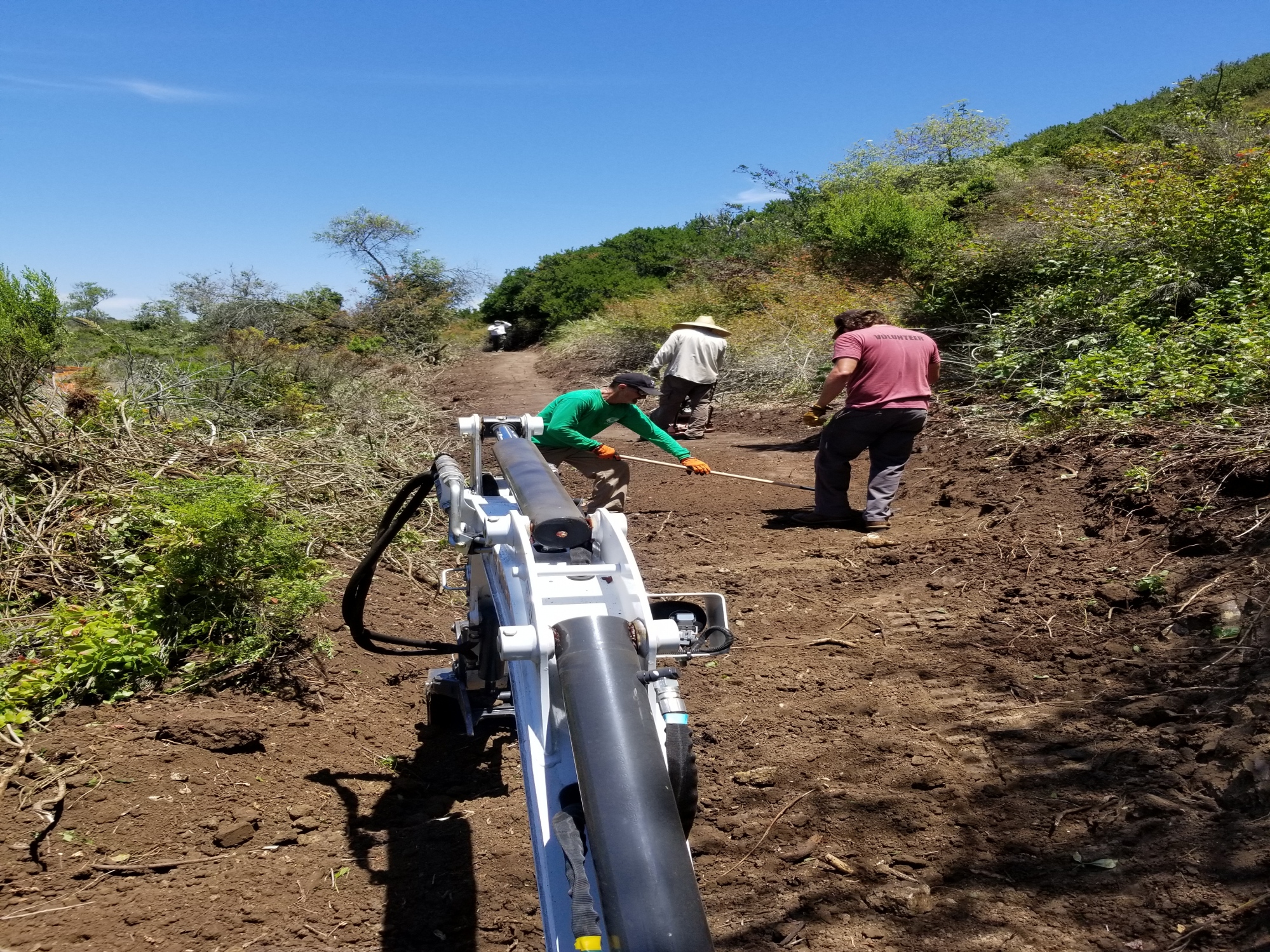 Long term advocacy like this has years of effort behind it.  In 2014, SDMBA pushed the City of San Diego to finish a management plan that had been shelved for nearly seven years. The approval came on the heels of enforcement by the California Department of Fish and Wildlife (CDFW) on their parcels of ownership within the Del Mar Mesa property. Many individuals received tickets during this enforcement period.  The City Open Space Division had just applied for a grant to provide more enforcement on the City owned portion of Tunnels at Del Mar Mesa. This was especially unpopular with the trail user community due to the potential enforcement being on trails that would someday be open to use, but just hadn’t been codified in the plan. In mid 2014, the management plan was finally completed and off of someone’s desk where it had been living for years waiting for approval by the City.

In mid 2015, the management plan was approved by the City of San Diego  Before we could celebrate, it was quickly realized the approval for portions of the trails needed to go to the California Coastal Commission. The City attempted for several months delayed the approval of small sections of trail until they could get it reviewed and approved by the Coastal Commission. In late 2015, the plan was finally approved by the Coastal Commission, but user confusion over the trails plan was evident. The legal trails had been opened, then closed and then reopened again leading to frustration on the part of trail users.  People showed up in droves to ride new trail and were confused by the changes and, in large part, were also riding additional trails the City was attempting to permanently close. In addition, during the seven years the City had been sitting on this plan, they were unable to secure an easement that connected Tunnel Four to Switchbacks, back up to the Mesa. This was important as they had closed several other trails that provided loops and pointed to this loop as the only viable option.

In 2016 and 2017, SDMBA worked hard to push the City to prioritize this alignment and acquisitions in this area and some progress was made. Pardee Homes turned over some of its mitigation land to the City that secured an eastern piece of Deer Canyon. Negotiations also continued between the City and the large private owner in Deer Canyon.  An option for a trail connection was offered by the owner, but it was not sustainable nor viable. Sometime in 2018, we found out the owner had passed away and the property was listed for sale. The parcel of 30 acres were purchased by Caltrans/Sandag and some history about that can be read here. This was perhaps the best scenario, as this property could have been sold for commercial development or home building.

In 2018-19 the trail came close to legal as it was called for in the management plan for Del Mar Mesa and all the community plans. The only catch was that winter was brutal and the creek that ran next to the trail ran high, reducing the trail to only a couple of inches wide in spots. SDMBA Trails Coordinator, Ben Stone and three experienced and brave volunteers worked to cut a new trail through a wall of poison oak over two days in June of 2019.  The work would realign the trail and provide a sustainable option that met the City’s trail standards. In 48 hours, this crew cut and finished about 250 feet of trail that will be ready to ride legally before the end of 2019. Work was expedited with the use of SDMBA’s mini excavator and power wheelbarrow. The poison oak was old growth and extremely healthy. Even though extensive precautions were taken regarding protection, disinfecting and Tecnu/pre Tencu, everyone suffered the effects via a savage rash. 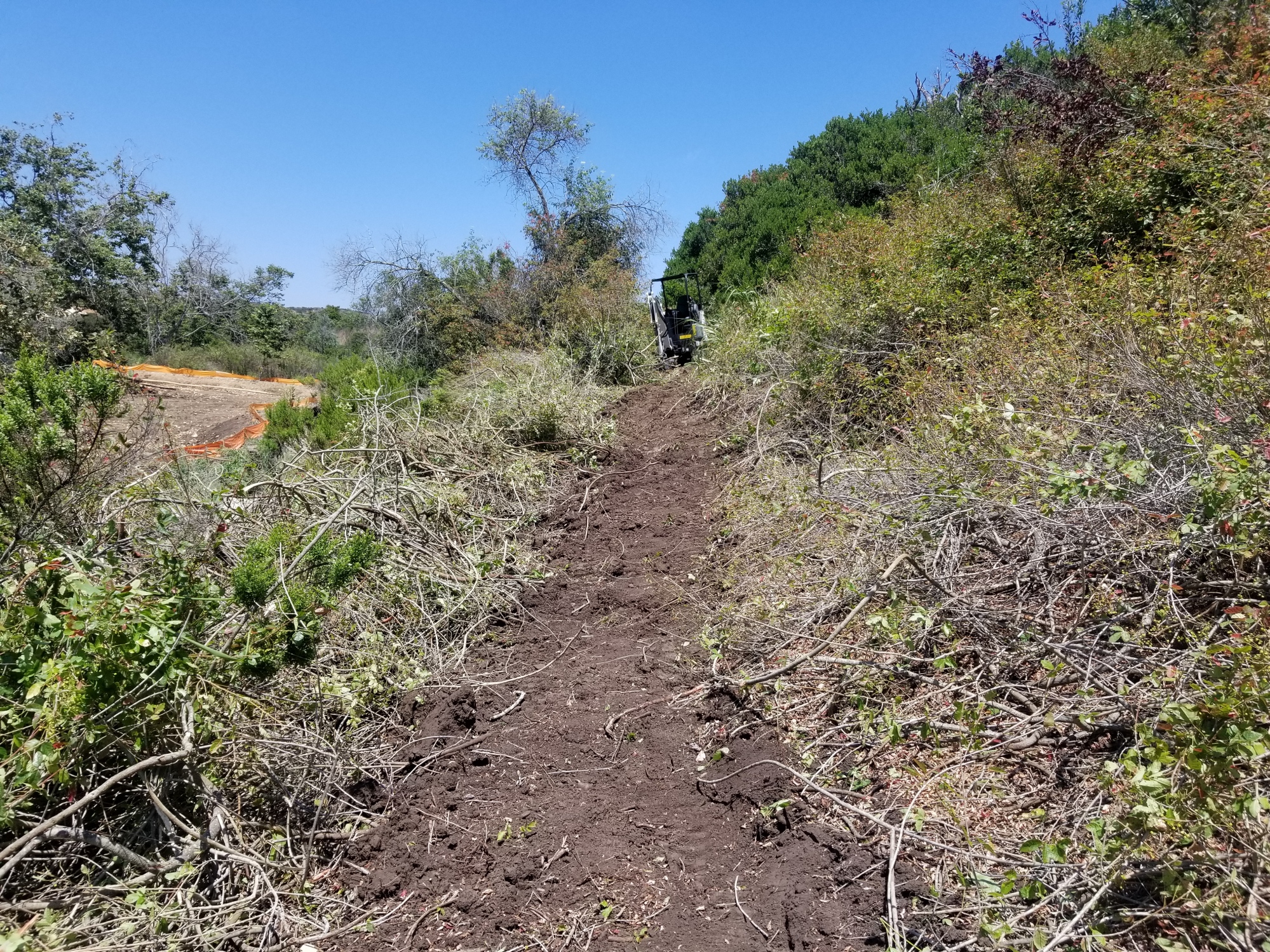 Nearly two decades of work went into these trails including advocating, building and maintenance.    We are now seeing successful resolutions to projects started nearly 20 years ago.  It's important to remember the rewards of today are from seeds of advocacy planted years ago and continually addressed until there is a successful resolution. 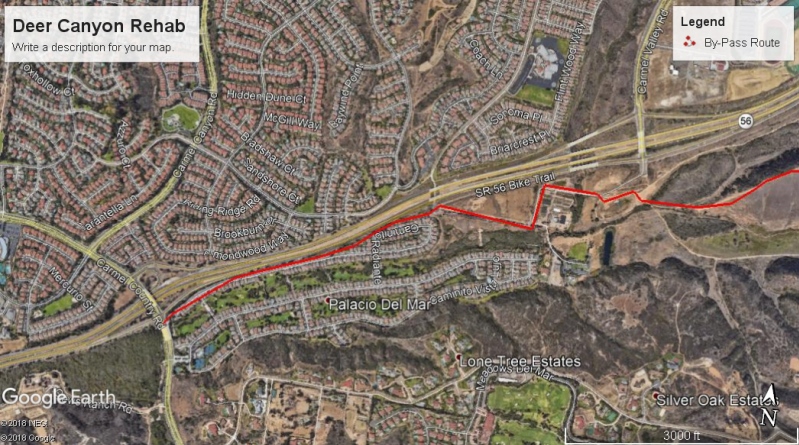 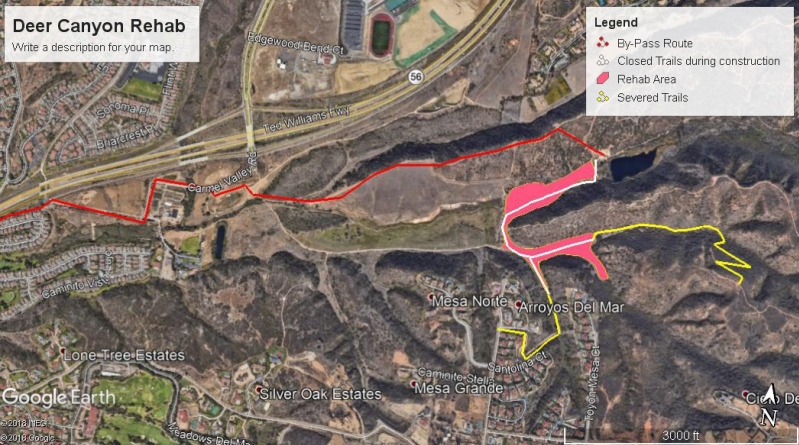 Appendix Trail
Allen Kashani of Pardee Homes came to SDMBA in the fall of 2015 looking for assistance in building a single track trail in canyons of one of their recent developments on Del Mar Mesa.  The houses were built upon an area loved by many riders for a trail system formerly known as The Intestines.  Many riders were saddened upon the development of the property.  This new quarter mile Appendix trail pays homage to and set in the canyons below the original location of the now lost trails. This was one of the first ventures between SDMBA and a developer.  The build was financed by Pardee construction but completely overseen by SDMBA under the leadership of Trail Liaison Matt Bartelt and built by over 100 dedicated volunteers contributing more than 600 hours time to complete the trail in one build season.

In the late fall of 2015, trail leads met with the Pardee representatives, biologists, and landscapers to scope out the work.  The best path, allowing for distance, grade, and sensitive habitat was laid out with flagging tape.  In spring of 2016, a 4 foot wide corridor was cut through heavy brush following the flagging tape.  The first build day was part of the IMBA's now defunct Trail Crew.  Half of the day was dedicated to teaching new builders as well as city staff the proper techniques for building sustainable trails.  About 1/4 of the trail was cut this day.  Over the coming weeks, multiple one day builds attracted people from all over San Diego.  Bike riders, equestrians, hikers, students, private citizens, and city officials all lent elbow grease to complete the task.  Pardee graciously provided irrigation to assist in the completion of a section of trail that became too dry and hard to effectively cut and mold into a trail.  It was a perfect storm of cooperation.

By late spring the trail was complete and word of the trail spread fast.  The ribbon cutting was attended by city officials, Rangers, Pardee officials and SDMBA representatives.  The mood of cooperation forged in this project has spread to other areas of the city.  It has helped create a good relationship between the City of San Diego, Pardee Homes, and SDMBA that helps forge new trail opportunities to this day.  Seen as a positive in a community that saw trail contractions only a few years before, the trail is a welcome addition to the Los Penasquitos trails system. 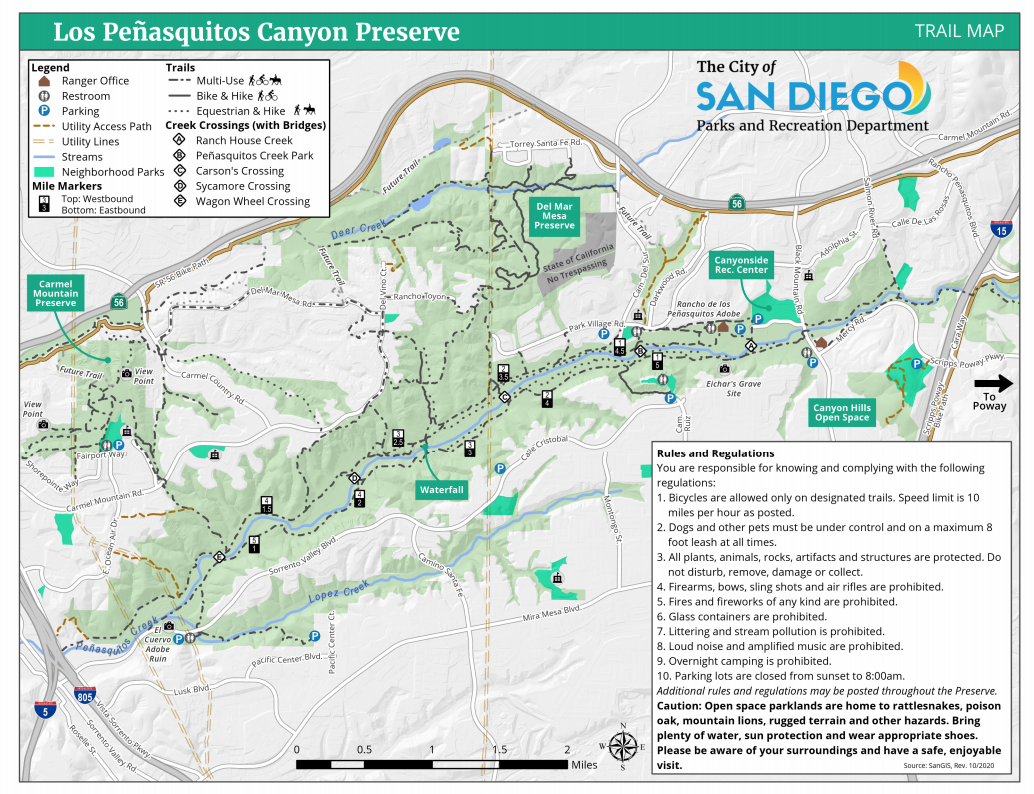