Tickets On Sale Now - Get Yours Before They Sell Out!

Score a sticker sheet made in collaboration with local tattoo artist Angel Lopez!

Join us at the Sweetwater Bike Park for a bike party!

Rancho La Costa Preserve, an island of open space nestled between Carlsbad and San Marcos, is a unique area for many reasons.  The area has an interesting history and is abundant with wildlife which calls this habitat home. Once very rural, but now surrounded by homes, it has become an oasis for locals and visitors alike as a place of respite and recreation. The story of access in the area for mountain biking started a long time ago. It is a tale of local advocates taking up a cause, working collaboratively with the land manager and the San Diego Mountain Biking Association and never giving up. 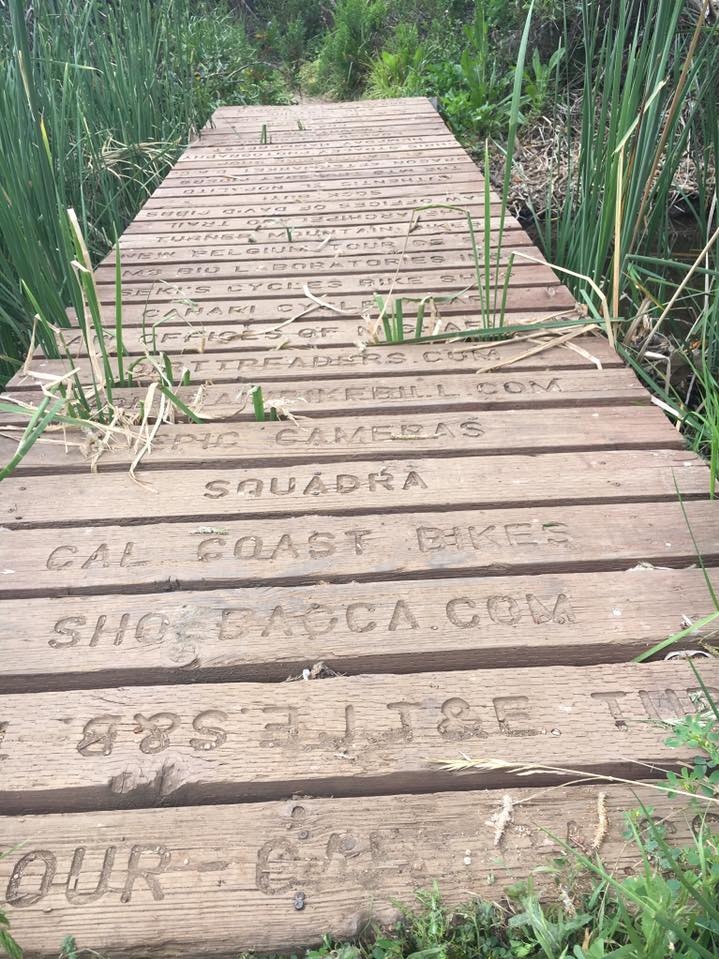 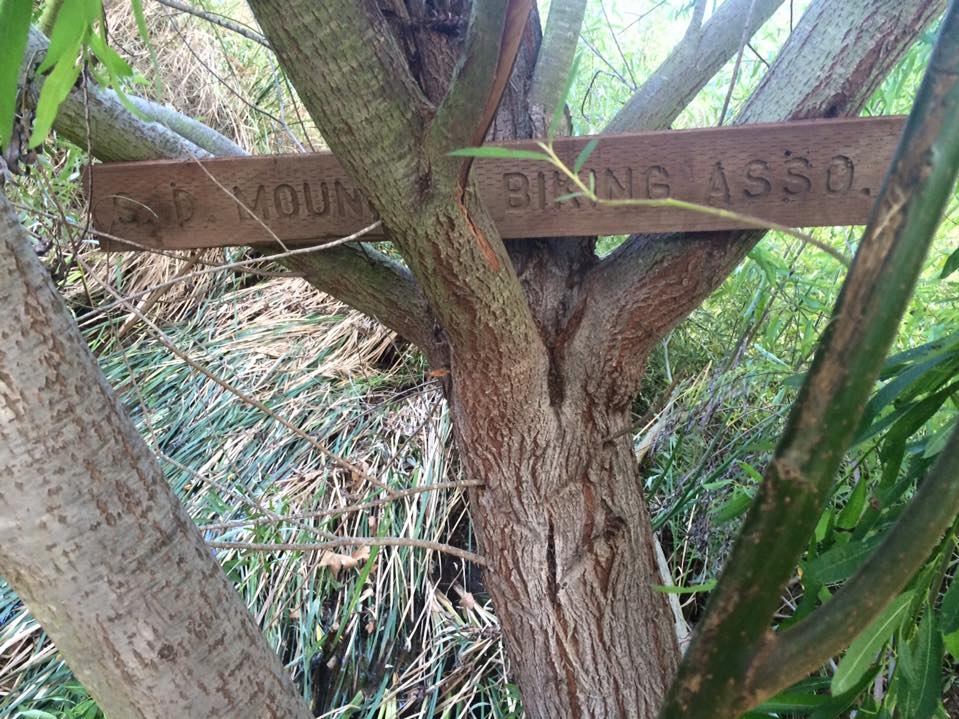 The Rancho La Costa Preserve parcels were deeded to the Center for Natural Lands Management (CNLM) between 2001 and 2011. This site has been protected to mitigate for impacts to coastal sage scrub and other vegetation communities as a result of development projects in the vicinity. This Preserve acts as a regional corridor connecting the Batiquitos Lagoon and Lake Hodges. Although the site is broken into many parcels, the land owned by the CNLM is approximately 1,640 acres. The Preserve includes unique features such as Box Canyon, Copper Creek, the summit of Denk Mountain, and nearly 500 acres of prime native coastal habitat to remain non-developed in perpetuity.

The prime goal for this Preserve is to protect the habitats and species that depend upon this protected area for survival. The focus of work is to protect the Preserve from negative human abuses, remove non-native plant species, monitor plant and wildlife species, and conduct research projects. Recreation is secondary to these goals. There are over 15 miles of trail at the Preserve. Hiking is allowed on all trails; mountain biking is also allowed on some trails.  Dogs-on-leash are allowed in all areas but Copper Creek.

Before CNLM took over management of this area, the land was privately owned. There were some old legacy trails faintly there that some knowledgeable locals knew about. Up to that time, the owners had been living on the perimeter of the suburbs. But now they were being surrounded by an explosion of growth and all the people that come along with that development.  The stories of their efforts to keep people away and stop trespassing will go down in lore. The property then went through another owner who bought it for purposes of mitigation and then the management was passed over to CNLM. CNLM manages both La Costa (Denk Mtn) and the land going up to Double Water Tanks. Copper Canyon ties it all together.

In the mid-2000’s, local trail advocates and riders began to explore the La Costa trails.  CNLM staff was approached by these advocates when a sign suddenly appeared at the top of Denk Mountain marking “This is Not A Trail.”  Confused by the sign’s placement, they asked CNLM staff why that trail was chosen to be closed. Staff said they just wanted to close one of the redundant lines. The advocates asked if they couldn’t keep the more “fun” trail open and close the more boring trail.  The staff agreed and the sign was moved. The first success for mountain bikers at La Costa!

These advocates continued to work with management to see how the trails could be improved to control erosion and increase the trail experience.  Many work days were held sometimes with only one or two guys out digging.

Local advocates worked with CNLM on more improvements to the area cutting the switchbacks in 1997. A major concern was the three stream crossings in Copper Canyon. Bridges were needed to negate the effects of bank erosion and general damage to the stream habitat. With the trail now open to the public certain standards had to be met so locals, under the leadership of Rich Julien, developed a plan to install the bridges to standards used by the US Forest Service. Rich came onto the SDMBA board of directors in 2007 and served for several years.

CNLM was going to pay for the bridges but Rich was so stoked to get Copper Creek open that he wanted CNLM to use their money for bigger things like acquiring more open space and protecting what little habitat remains here.  Rich petitioned SDMBA for the costs of the three bridges and the Board granted the money. Other supporters pitched in $50 each to have their names or the names of their companies routered into each plank. Over 80 individuals and 20 business sponsors supported this effort.  These bridges still stand stong today. 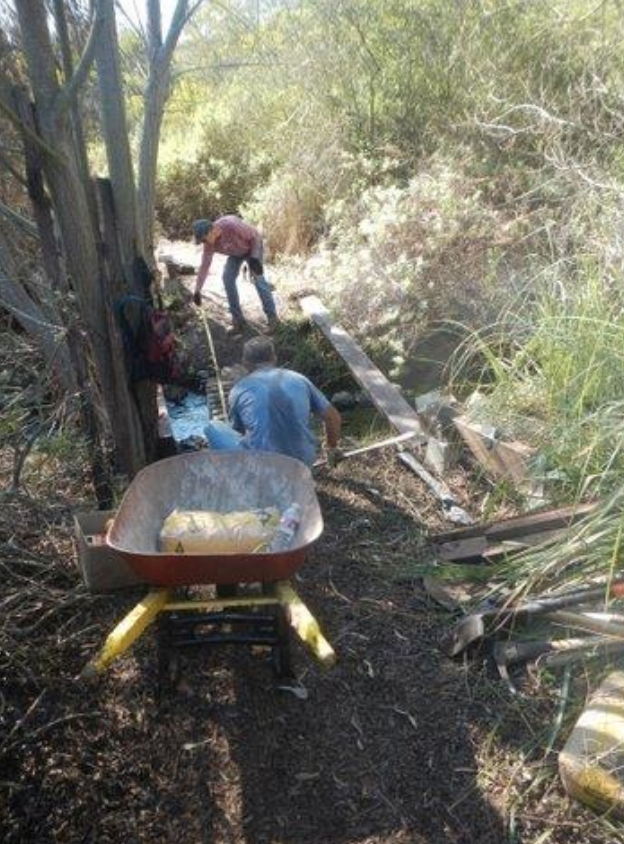 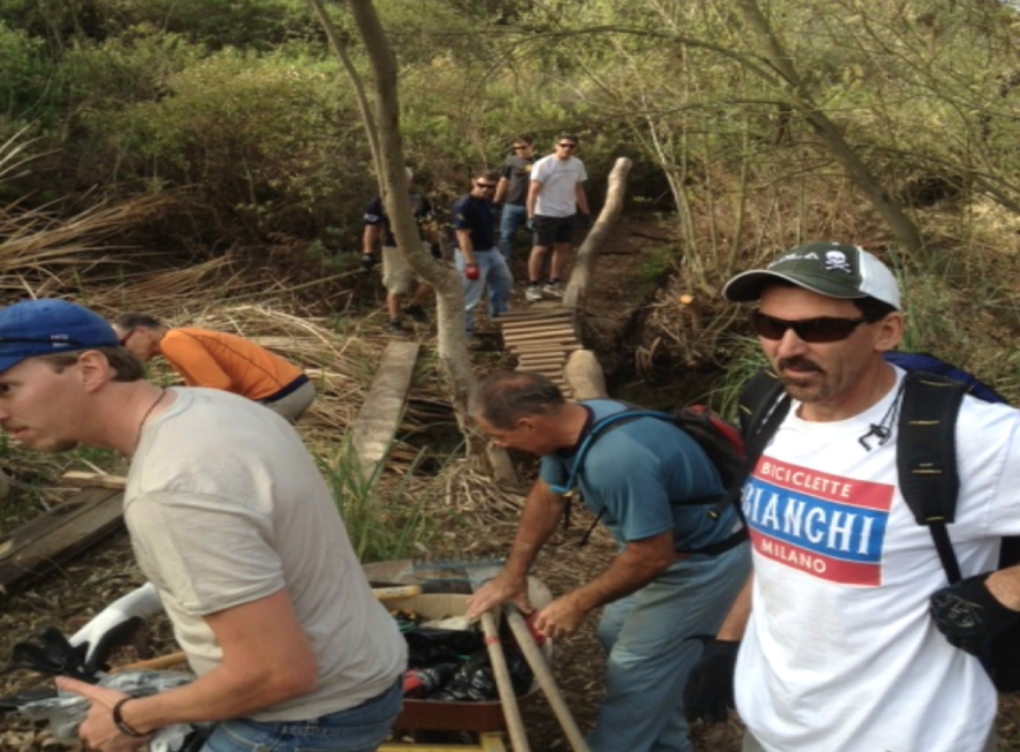 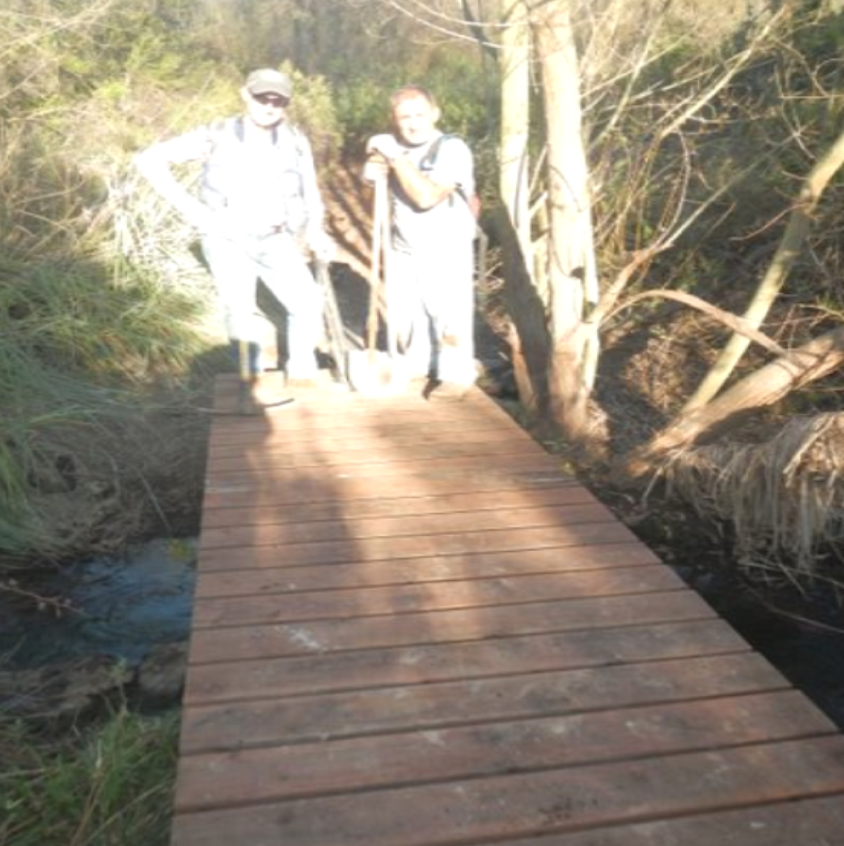 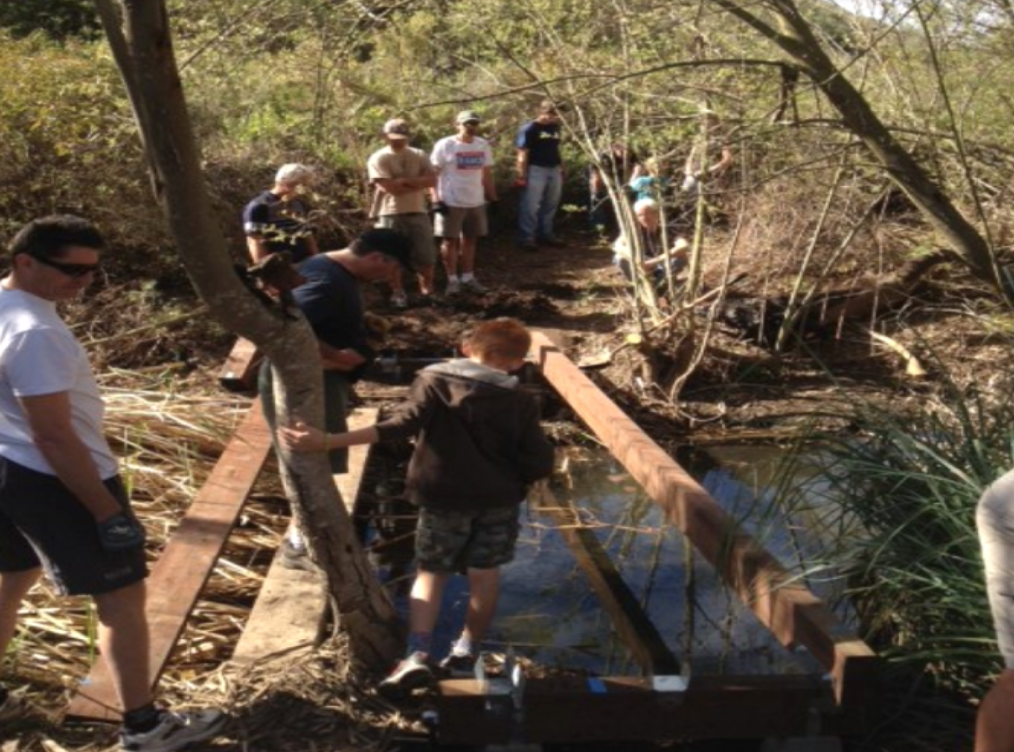 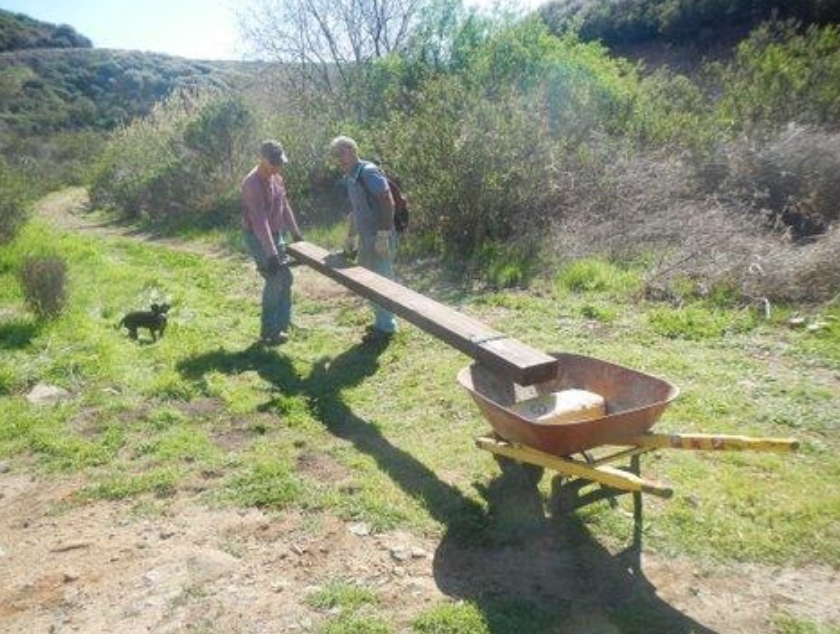 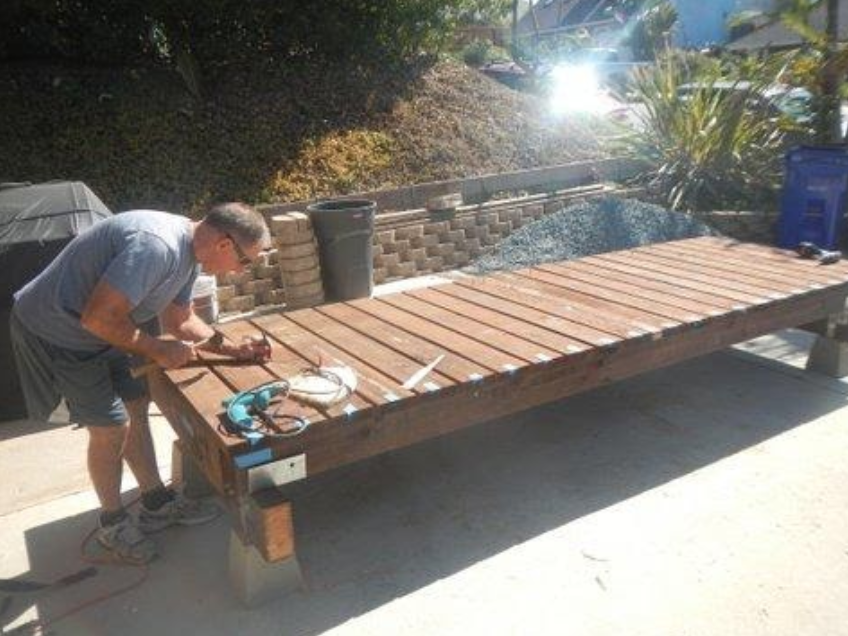 Flanked by Bryan Furbee and Dee Folse among many others, Rich set to work on planning, building and installing the three bridges in the fall of 2013. These bridges are sturdy as ever and are a testament to the will and skill of these north county advocates.   Around this same time, the crew handmade some beautiful signs with messages like “Please Don’t Cut the Corners” and “Skidding Ruins Our Trails.” These signs were installed throughout the trail system. While most of these signs are long gone, their messages still need to be heeded. 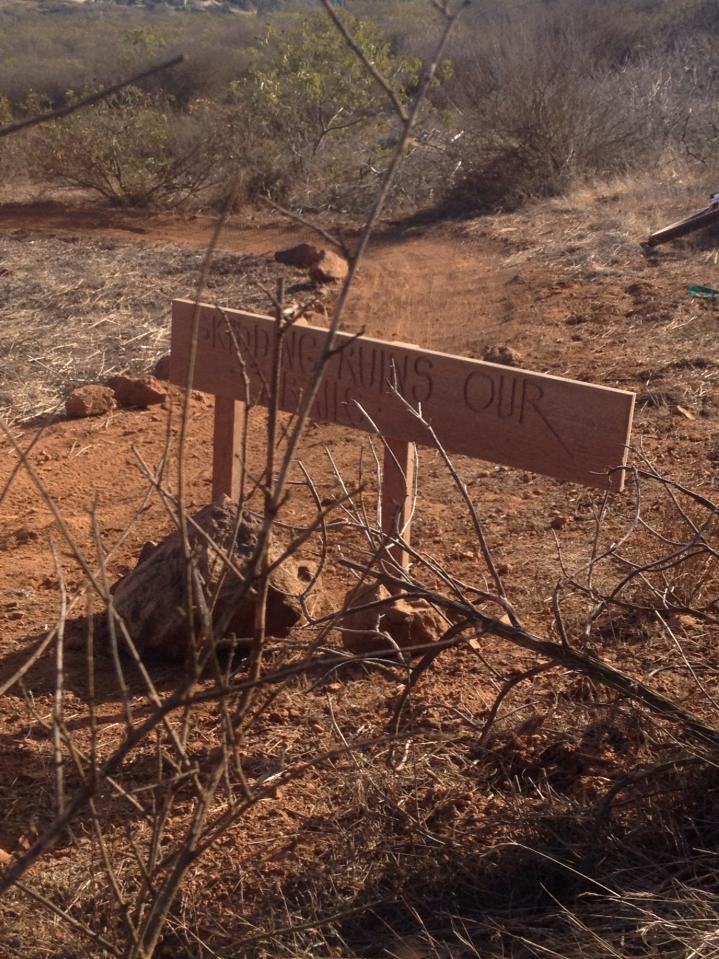 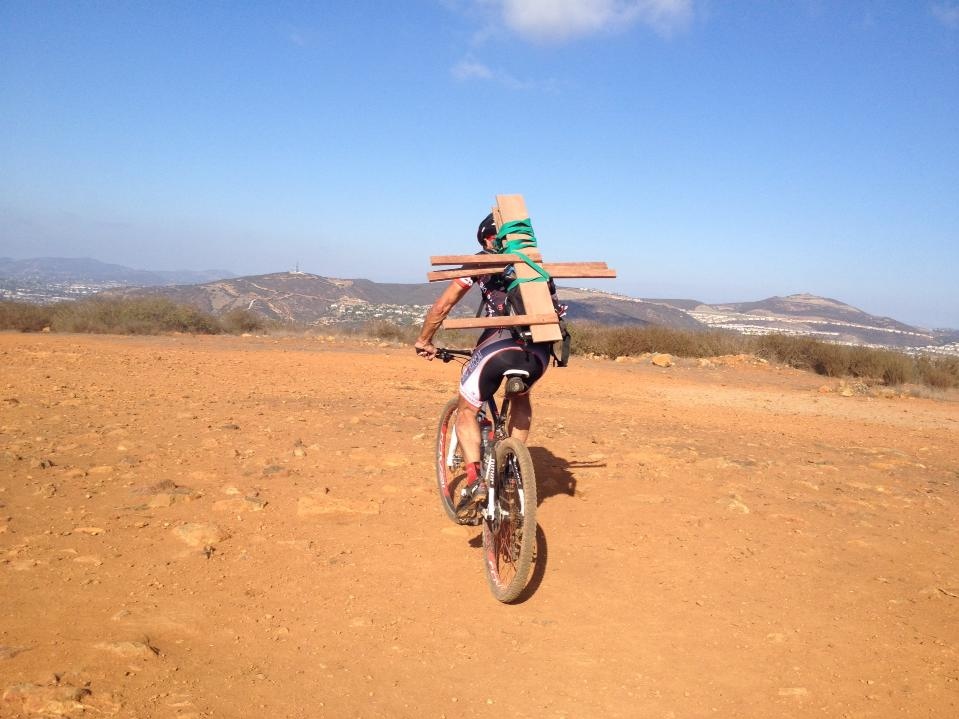 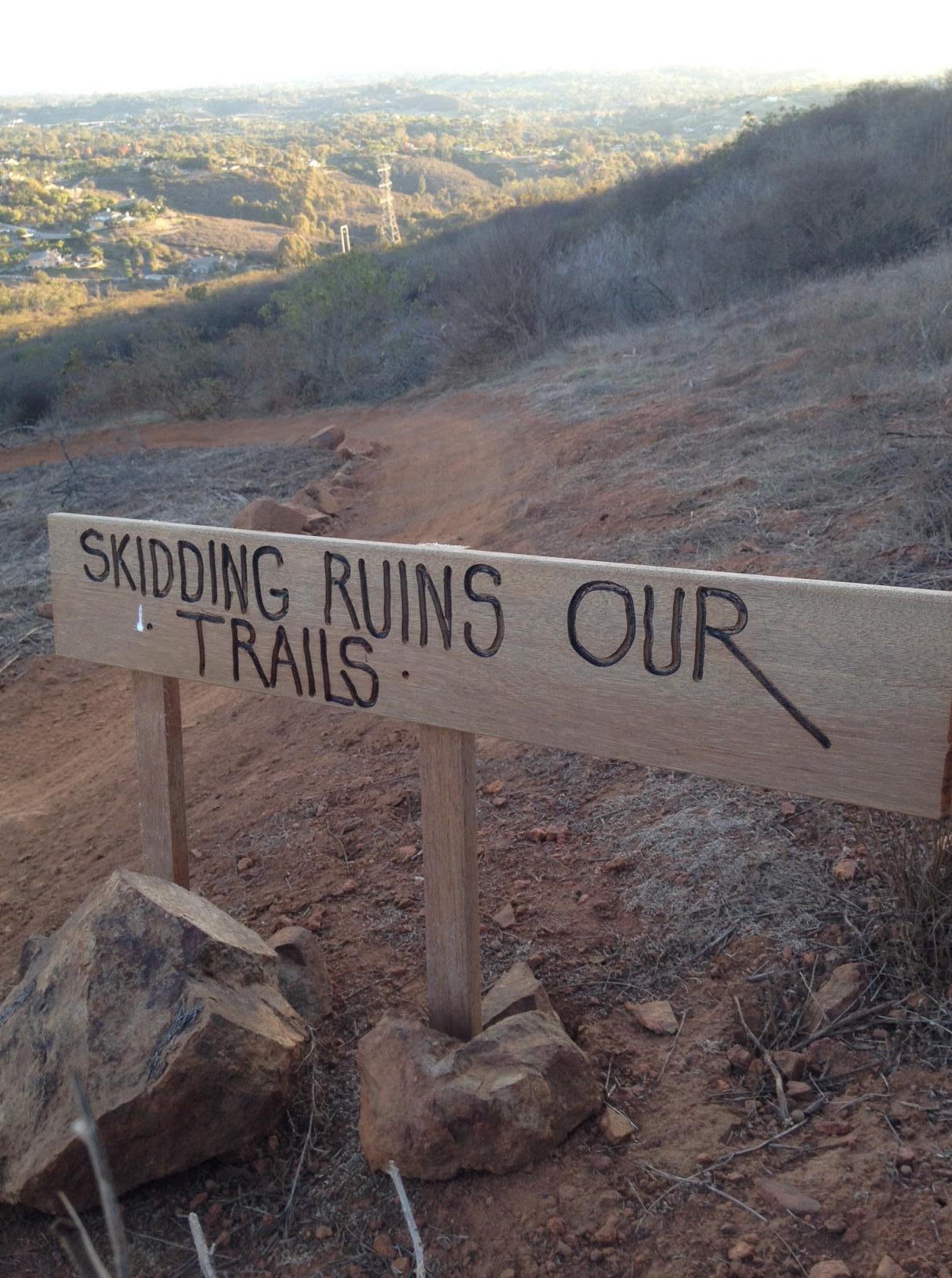 In October of 2017, SDMBA donated and installed a Bike Tool Station at the top of Denk Mountain.  It was an immediate success and has come to rescue of many a biker in need. From 2017-2019, SDMBA planned and oversaw several workdays preceded by multiple walk-throughs with CNLM staff to determine priorities and scope of work.  A special trimming day on Copper Creek was held with CNLM staff, SDMBA volunteers, and staff from the REI store in Encinitas. 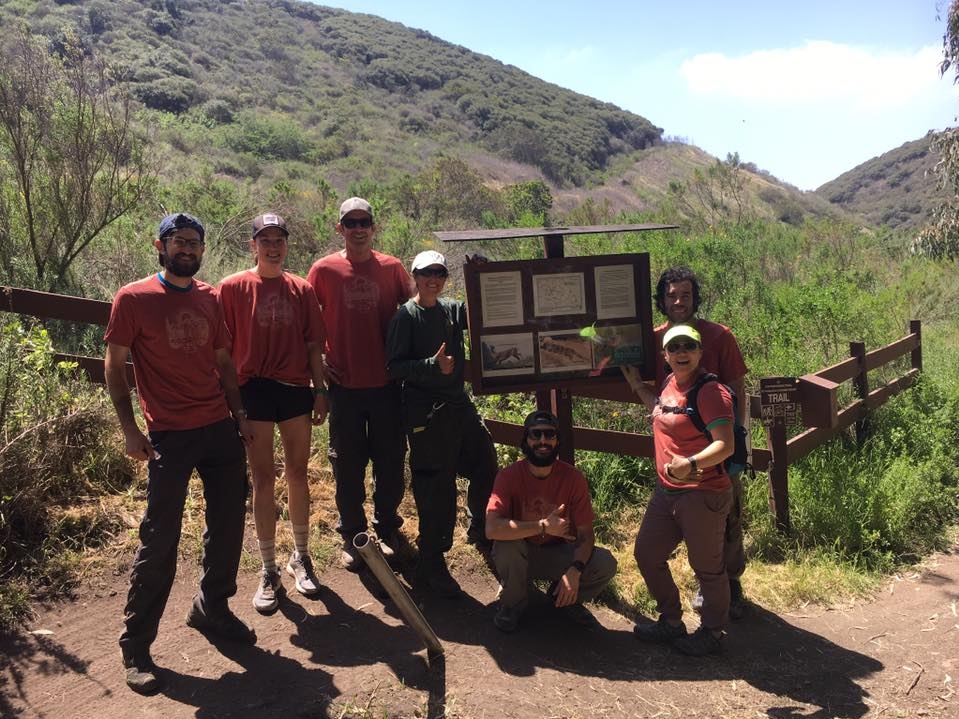 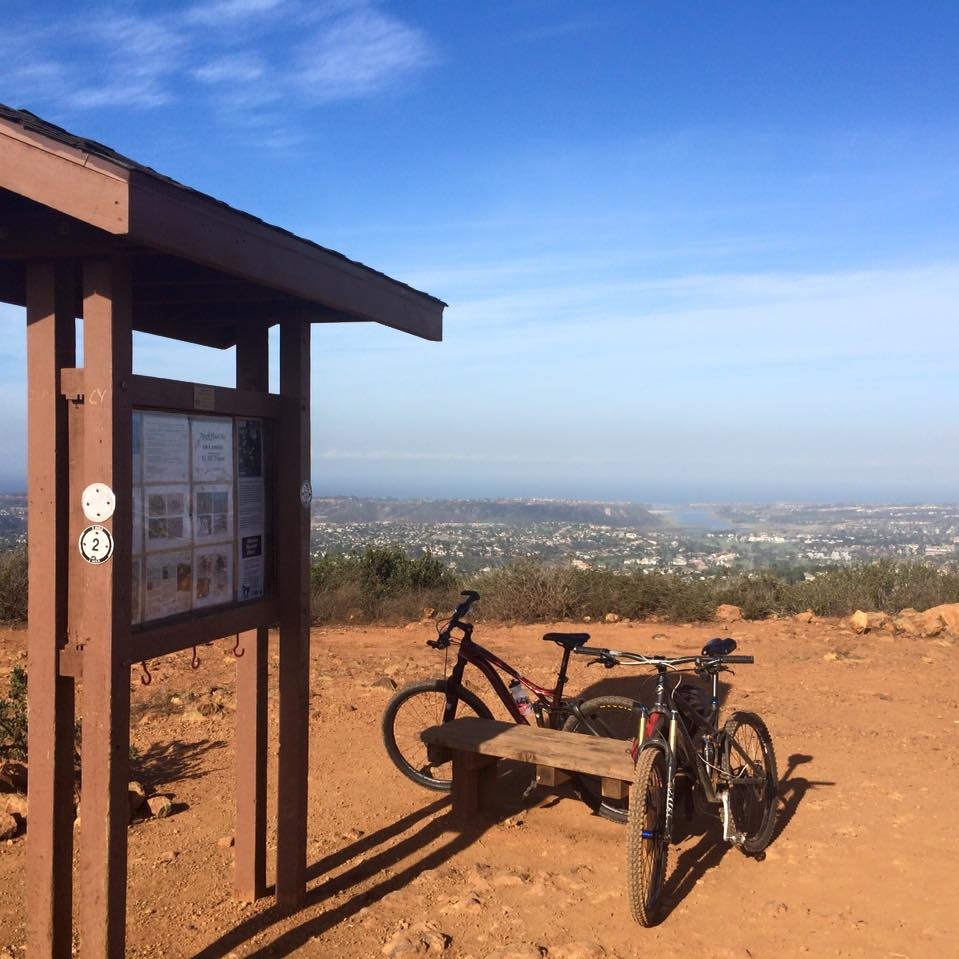 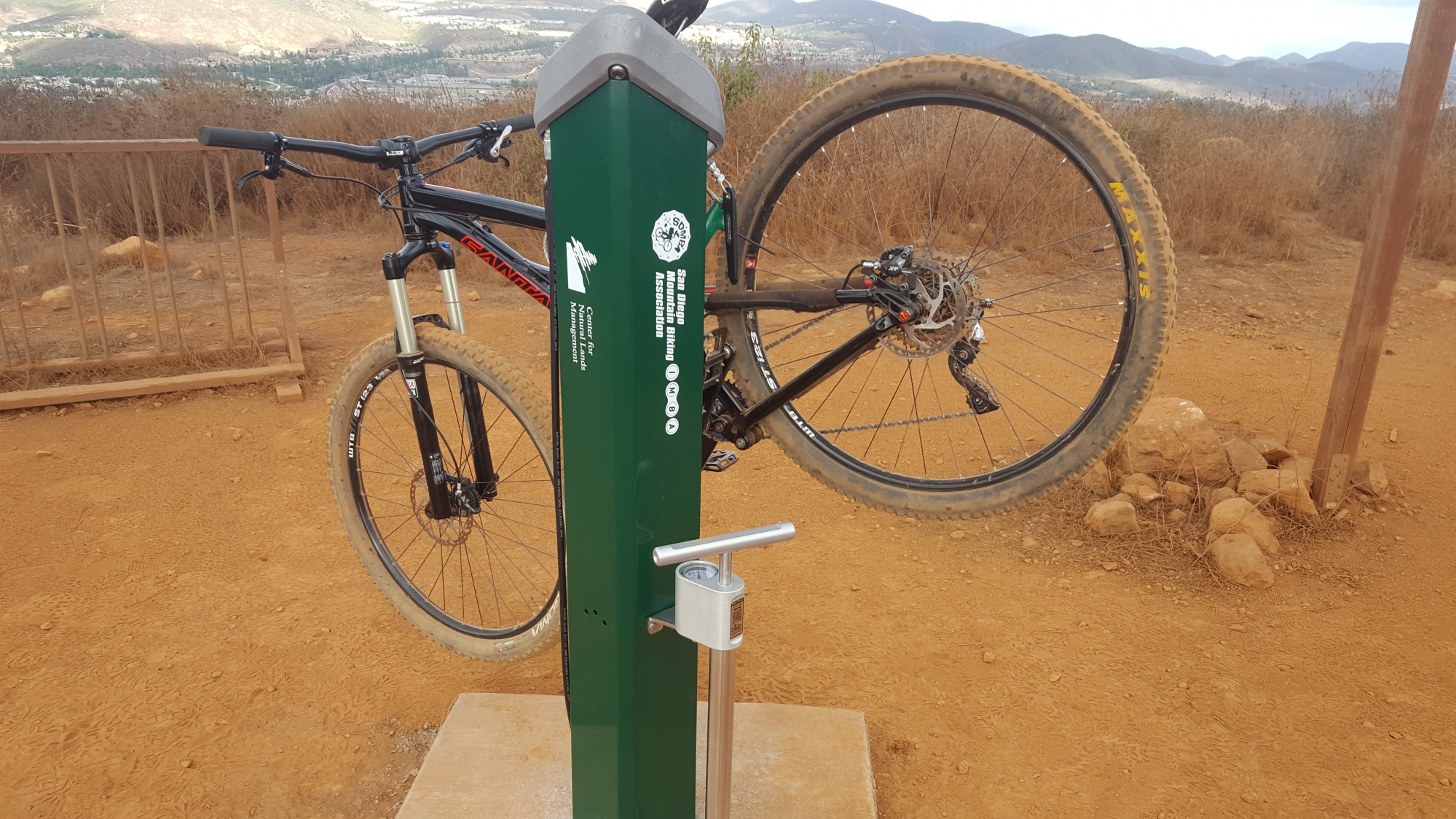 The SDMBA Archipelago Ride, a spring classic, has wandered through the La Costa Preserve since its early and murky history began in the mid 2000's.  In recent years, SDMBA has donated $500 a year from the proceeds of this spring classic event to CNLM to help them with their conservation work and support of recreational trails.

Rich Julien’s philosophy, which he would pass down to any who would listen, has always been that people need to be part of the equation in the protection of open space, not to be eliminated from the equation. SDMBA agrees with this wholeheartedly. The partnership between local advocates, CNLM and SDMBA demonstrates what can be done, over time and with perseverance, to help balance the conservation and recreational use of an open space area.

SDMBA made a commitment to help with the long-term maintenance of these trails if they were legalized and we intend to fulfill our commitment on an annual basis to CNLM.
In March, 2020, SDMBA and CNLM entered into a formal Memorandum of Understanding in order to continue this highly effective partnership. 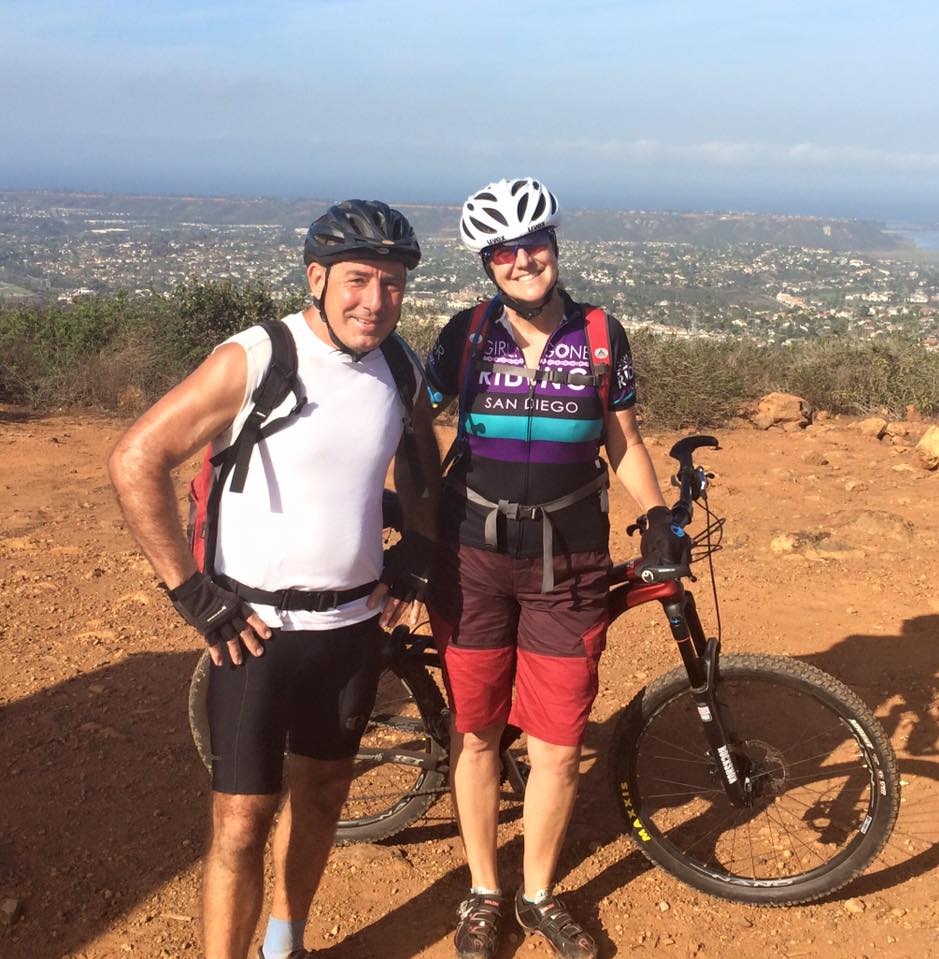